With TUI Villas, you’ll find a large selection of holiday homes and apartments throughout Europe and beyond. We are the operator of all the properties tagged with the TUI Smile and you will benefit from many advantages:

In addition to our own holiday homes and apartments, we also offer to mediate accommodation on behalf of third-party providers. These consist of reliable private hosts, local agencies, specialists, and renowned tour operators. You will see who the provider of the accommodation is in each property description.

You have a holiday home or apartment of your own and you want to increase your occupancy rate and reach more customers? TUI Villas will assume the active mediation process and Europe-wide marketing – without any risk for you as the owner.

Perhaps your accommodation is a TUI villa. Find out and register as an owner.

E-mails and requests sent via the form are processed around the clock, even on weekends and on public holidays.

Dear customers, we understand that you have a lot of questions right now and we will try to help you in the best possible way. In order to be able to process the changes of your already made bookings, we need all available colleagues and therefore we will stop our telephone availability until further notice. Please send an e-mail to customerservice@tuivillas.com. Our service team will prioritize the urgent cases and will contact you as soon as possible! Further information is continuously updated here.
Back to search/result list
Property no. 1405952 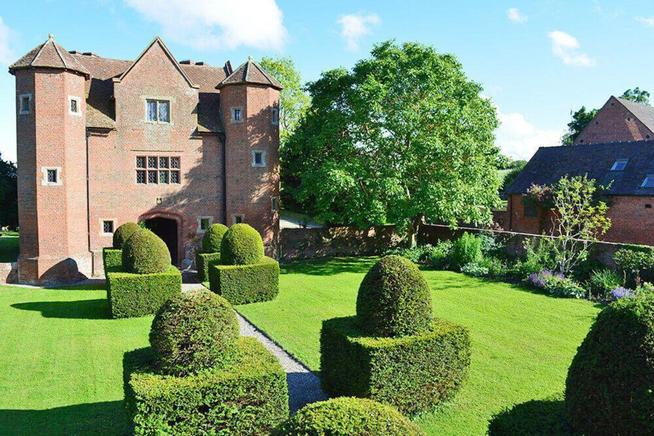 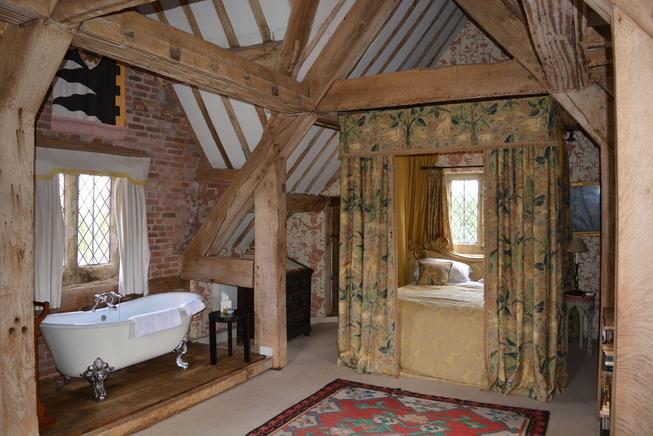 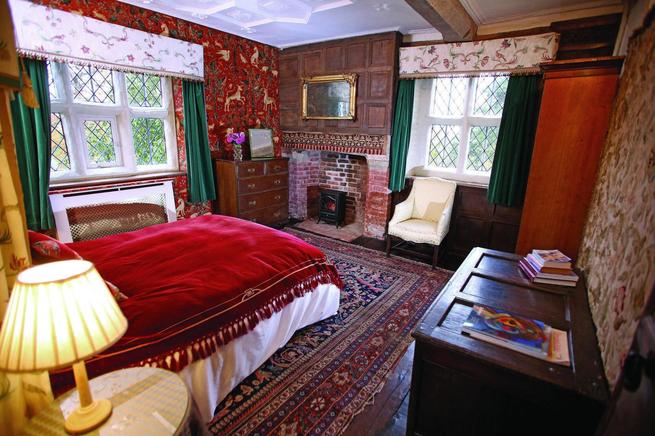 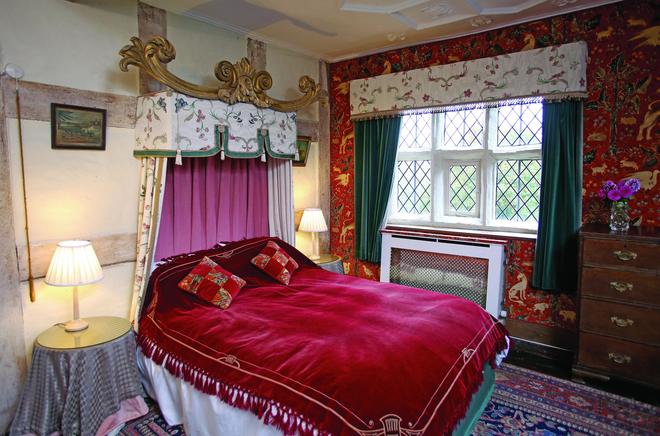 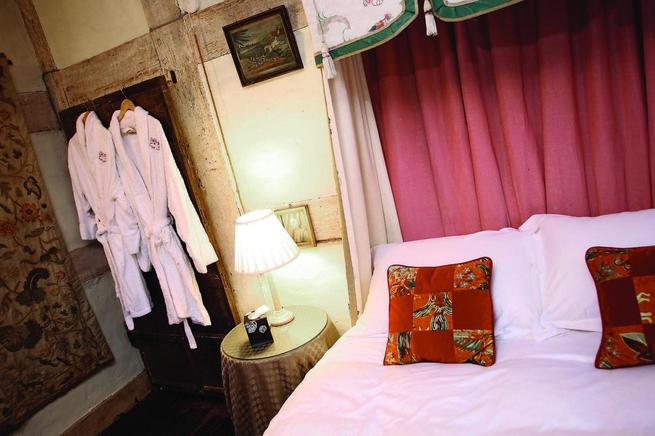 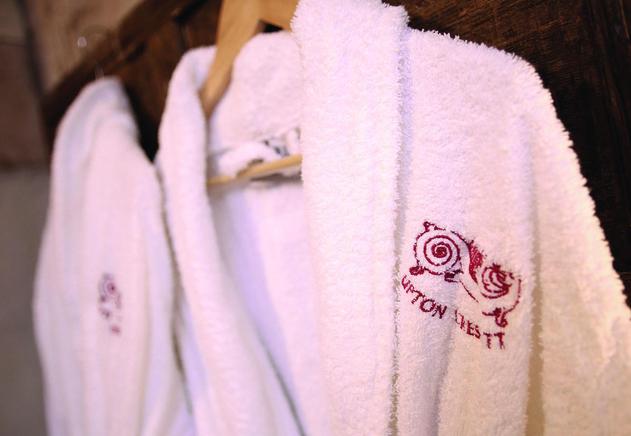 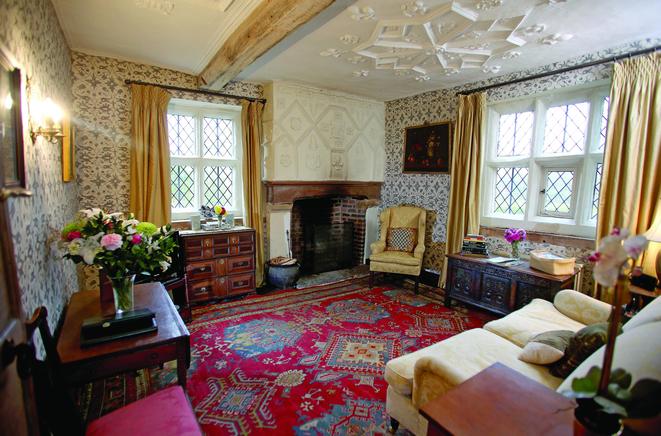 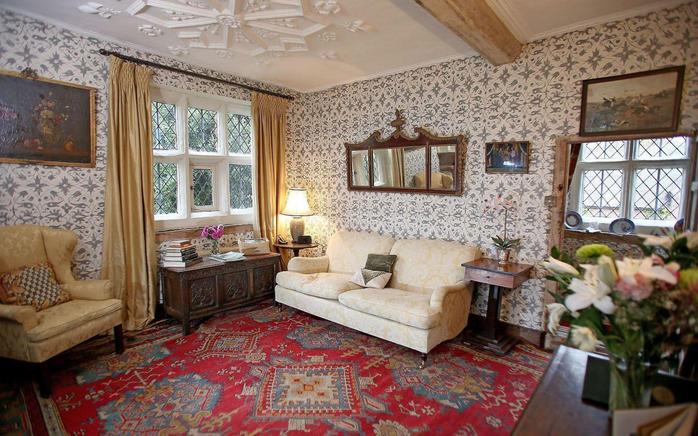 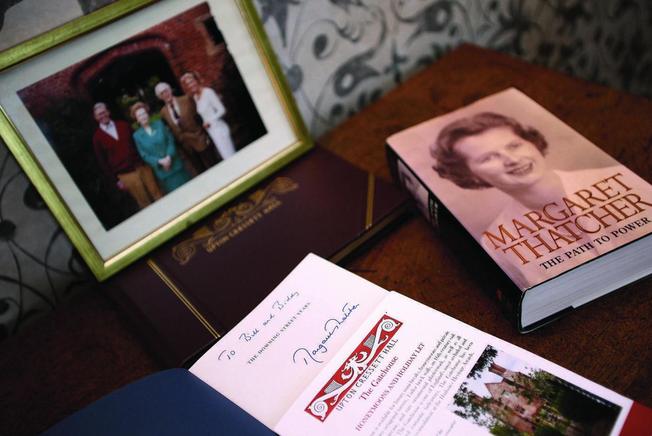 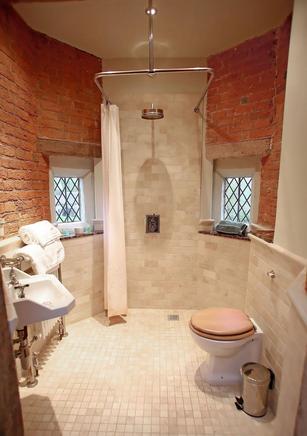 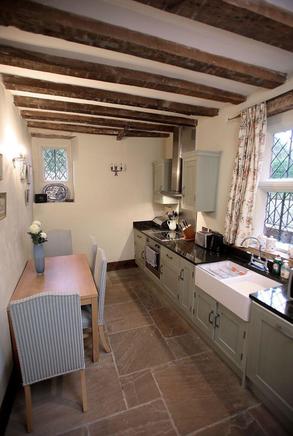 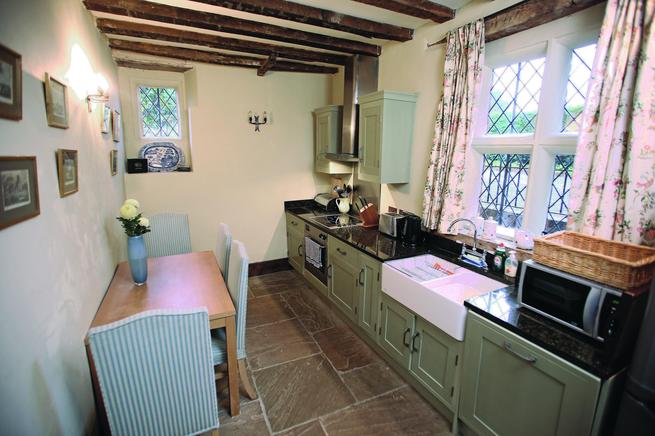 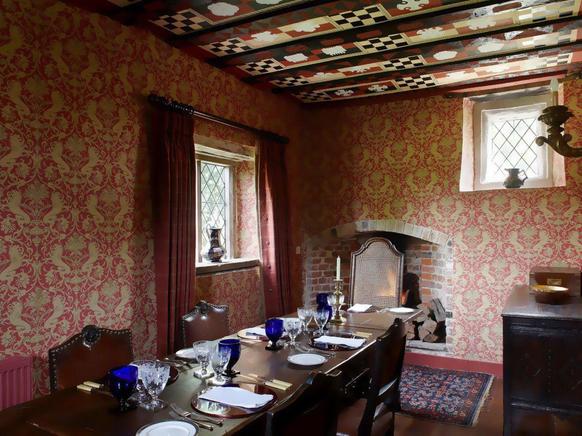 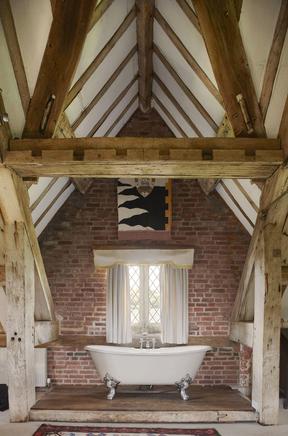 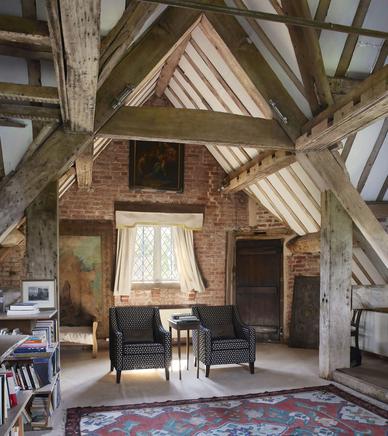 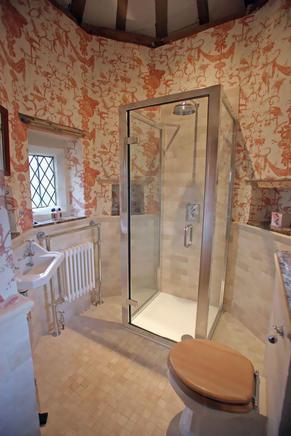 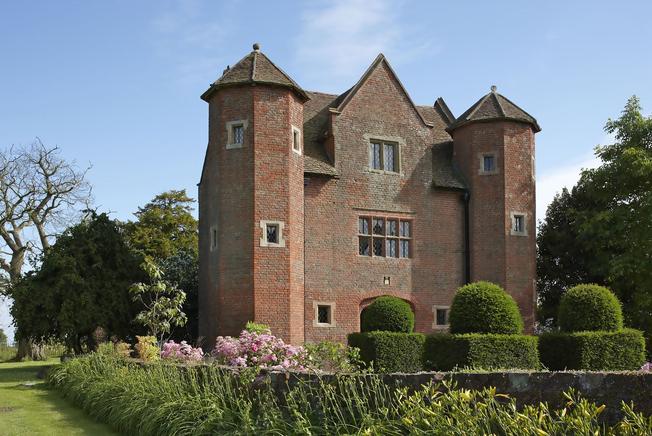 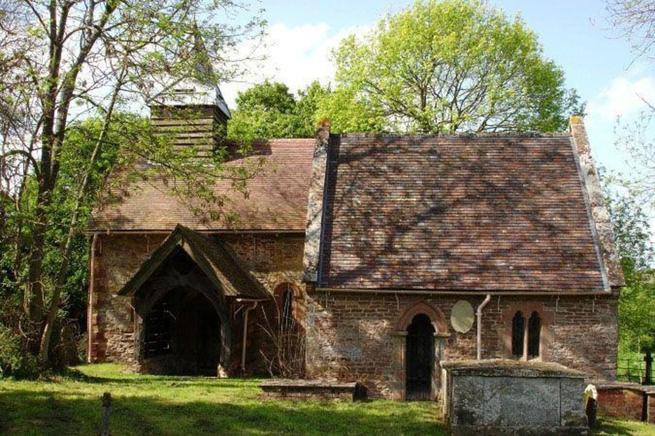 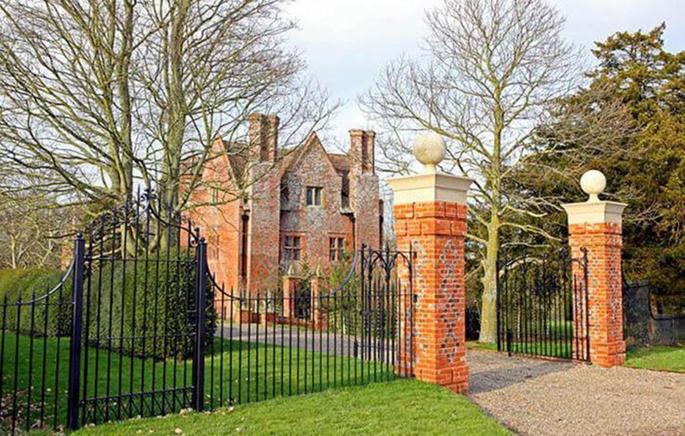 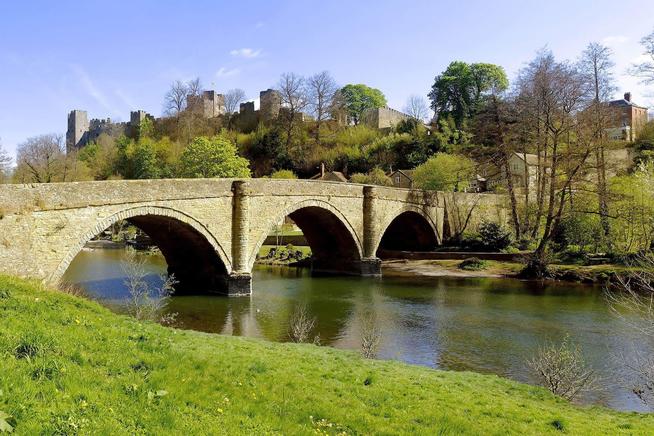 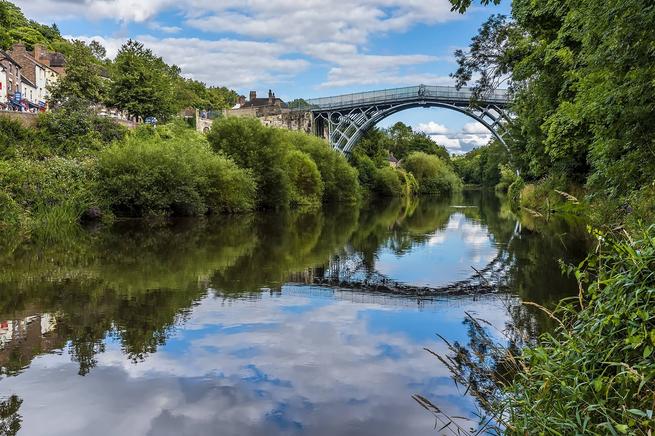 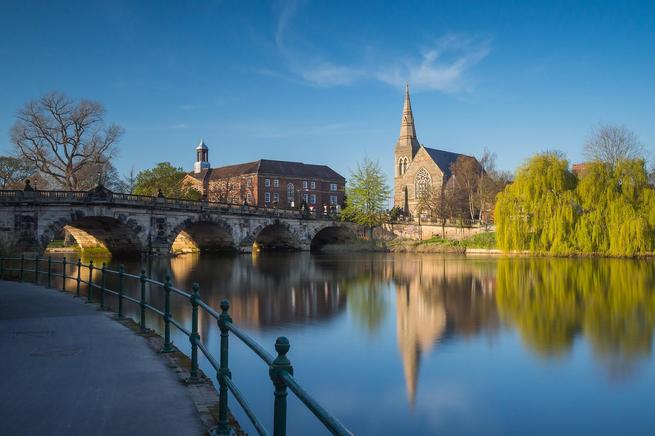 Close map
The holiday house is situated in Upton Cressett. The place is shown on the map. You will also find the location of the holiday house marked there. Subject to change: The description text and the travel documents which include the address of the holiday house shall apply.
To make your historical visit to Shropshire complete, a stay in this 'wow' factor getaway oozing history is a must!

Step back in time in The Gatehouse, an award-winning Elizabethan gem with rare plasterwork and works by the acclaimed artist Adam Dant. This truly unique property offers a luxurious hideaway for four people, ideal for small families or couples. With sumptuous four poster beds and fireplaces our stately Shropshire retreat is also perfect for honeymoons and special occasions.

A Royalist stronghold during the Civil War, it is one of the finest 16th-century gatehouses in England and fronts the beautiful moated Elizabethan manor of Upton Cressett Hall near Bridgnorth. Tucked away at the end of a peaceful country lane, the property looks out over miles of rural views and guests also have access to the hall’s historic gardens.

Regarded as one of the finest Elizabethan gatehouses in the country, The Gatehouse was runner-up for ‘Best Luxury Accommodation in the UK’ at the Hudson’s Heritage Awards.

The imposing Gatehouse, recently refurbished to a luxurious high standard with all modern comforts, has its own entrance gates, gravelled driveway and parking. Wrought iron gates lead through to a medieval courtyard and 16th century cobbled archway.

Once inside, there is a sitting room with a Tudor fireplace, kitchen, and a dining room decorated in a hunting lodge style with open fire seating ten. There are two bedroom suites (Prince Rupert Suite and Thatcher Suite) on separate floors, each with its own turret bathroom.

The Gatehouse has its own private garden with fruit trees and a fountain and fronts the beautiful moated Elizabethan manor of Upton Cressett Hall.

Prince Rupert of the Rhine, nephew of Charles I and commander of the royalist troops, stayed in the Gatehouse during the Civil War and the panelled bedroom he slept in is named after him. There is a long-standing tradition that the young Edward V (one of the princes in the Tower), son of King Edward IV, stayed at the early manor in 1483 on his fateful journey from Ludlow Castle (some 17 miles away) to the Tower of London.

Others who have stayed in the Gatehouse include Prime Minister Margaret Thatcher and Sir Denis Thatcher, Elizabeth Hurley and many writers and playwrights.

First floor:
The panelled Thatcher Suite master bedroom is named after the former British Prime Minister, and her husband Sir Denis, who spent two nights in the bedroom whilst staying at Upton Cressett in 1994. The suite comprises a double bedroom with a super-king (6′) half-tester bed with silk drapes, ornate 16th century plasterwork, oak panelling and mullion windows overlooking the Elizabethan apple garden. The suite also has an adjoining sitting room with pale blue Fleur De Lys wallpaper, silk curtains, a Tudor fireplace, a Knole sofa and spectacular plasterwork. The suite also has Freeview TV along with a CD player and an iPad dock.
The en suite wet-room-style shower room in one of the turrets has Lefroy Brooks fittings, marble tops and underfloor heating.
Carved oak spiral staircase to:

Second floor:
The Prince Rupert Suite used to be the old Banqueting Room of the Gatehouse, originally used as a ‘prospect tower’, with superb views stretching for miles across unspoilt Shropshire countryside across the old deer park. It is a huge and sumptuous luxury suite with 16th century beams and a super-king (6′) four poster canopy bed decorated in a 16th century-style linen fabric depicting scenes from an Elizabethan hunt by the artisan Melissa White. There is a free-standing claw bath on a raised oak platform inside the bedroom. The huge room also features an oak library section with two comfortable armchairs, a writing desk and a reading area. The suite also has Freeview TV along with a CD player and an iPad dock.
The en suite in one of the turrets with Lefroy Brooks fittings includes a powerful wet room shower, traditional claw foot towel rails and underfloor heating.

IN A NUTSHELL
4 Guests
Two double bedrooms, both of which are en suite
Two bathrooms
Suitable for children and baby (travel cot and high chair available on request)
Sorry, no pets allowed
Beautiful Elizabethan Garden – perfect for outdoor dining
Access to the historic gardens of Upton Cressett
Linen and toiletries
Parking for 2 cars

THE NEIGHBOURHOOD
Upton Cressett remains a haven of peace and rural beauty today – an ideal place to explore Shropshire and the Shropshire Hills Area of Outstanding Natural Beauty.

A secluded hamlet deep in the Shropshire countryside, Upton Cressett lies within five miles of historic Bridgnorth with its many individual shops, traditional pubs and excellent restaurants, and eight miles of the small, pretty market town of Much Wenlock. Next to Upton Cressett Hall is the historic Norman church of St Michael’s with its century wall paintings.

Bridgnorth is an attractive market town famous for its funicular railway and the many flights of steps which connect the High and Low Towns. Regular steam trains also run from here along the Severn Valley Railway. The town has many charming pubs and bistro restaurants, as well as high street shops, a supermarket and a cinema.

Much Wenlock has been voted the second most beautiful town in England. You can stroll around the ruins and grounds of the ancient Wenlock and Buildwas abbeys, visit the local Olympian museum and browse for second hand books (Wenlock Books won the coveted Independent Bookseller of the Year award). Or go antique shopping, check out the artisan shops and galleries or visit the traditional butcher, Ryan’s, that has won a national award for Best Butcher in Britain.

Half an hour’s drive away to the south-west is historic Ludlow, one of the gastro capitals of England with award winning Michelin restaurants, secluded gastro-pubs, historic market square and famous castle ruins where the two ‘Princes of the Tower’ were brought up in the late 15th century. In April 1483, the eldest of the two princes is reported to have stayed at Upton Cressett on his fateful journey to the Tower of London after the death of his father Edward IV.

To the north-west, also half an hour away, is historic Shrewsbury, birthplace of Charles Darwin, with its old cathedral, market squares, theatre and riverside restaurants.

There is a wealth of country parks, museums, historic houses and gardens to explore, including the Ironbridge Gorge Museums, The Dower House Garden in nearby Morville and the world famous nursery gardens of David Austin Roses in Albrighton.

Excellent walking opportunities include the Shropshire Way, the county’s flagship walking and equestrian trail, only half a mile away.

VISITORS' NOTES
The Gatehouse can be taken with The Coach House (sleeps 4) or/and The Moat House (sleeps 4) for parties of up to 12 guests. The properties are within a minute’s walk of each other.
Guests can unload their cars in the bay outside The Gatehouse steps and then use The Hall car park during their stay.
Access is via a winding and, in places, steep lane which leads to the Hall.
Sorry, no pets are allowed at this property.
Both bedroom suites are reached up an oak spiral staircase which is not suitable for small children or infirm adults. It has a rope banister but please be cautious.
Minimum stay 2 nights all year, except Christmas and New Year which is 4 nights.
Check-in is after 4PM
Enjoy your stay, thank you!
show more
Approx. 63 m²
2 bedrooms
2 bathrooms
pets not allowed
All features

This holiday house is offered on behalf of Travelnest Ltd., our partner in London (Great Britain), partner since 2017. Secure and free-of-charge payment via Wolters Reisen GmbH: We’ll regulate the payment with the provider for you.

* Unless otherwise indicated, this property is not equipped for the disabled.
Visitor's tax and security deposit: visitor's tax included, security deposit GBP 250.00 (mandatory, payable at location)
There are no customer reviews available for this property yet.
Please provide a review for this property.
Rate this property
This holiday house has been offered by us since 01/06/2018.
Customer reviews are being checked
Ask our customer service
Please provide a review for this location.
Rate this location
To search
All offersin Great Britain England Upton Cressett
About TUI VillasInspirationFor travel agenciesFor property ownersNewsletterJobs and Career PressData protectionTerms & ConditionsLegal notice